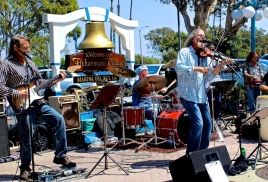 Jimbo Ross is the real deal, and his 4 CDs “Zydeco Boogaloo”, “Hit The Ground Running”,  “Drivin By The Blues” and “Steady Rollin’ Man” shows why this highly respected and seasoned session player has stepped to the forefront. Singing with committed soulful passion, and playing a custom made electric 5 String Viola/Violin (he calls it his “guit-fiddle”) the way most master guitarists play guitar, Jimbo blazes through electrifying improvisational leaps that will make a believer out of any skeptic.

Performing with a band of stellar musicians, Jimbo and crew dish out a soulful gumbo of Chicago blues, old school R & B, with rockin’ funk, soul and New Orleans Zydeco,  that will make you smack your lips and holler for more. All CDs are arranged and produced by Jimbo Ross.

JIMBO has spent years playing and recording with many of the greats in the industry as a session player and soloist as well as playing concerts and festivals worldwide. His credits can be found on every genre of American music and with some of the worlds most notable musical icons including: The Band “The Last Waltz”, Ray Charles, James Brown, Bob Dylan, Aretha Franklin, Roy Orbison, Stevie Wonder, Bobby Blue Bland, Earth Wind & Fire, Don Ellis, Page & Plant Tour, American Idol Band. The list goes on & on...

Jimbo is a true virtuoso string man who plays his axe with a bow, not a pick. His sound and style has distinguished him from the pack and is infused with a raw energy and powerful punch, beautifully complimented by his amazing technical dexterity and soulful prowess. Anyone who has seen this band perform live will attest to one serious party rocking on stage that is as good live as it is in the studio.

Drivin' By The Blues

Jimbo Ross and the Bodacious Band Live at Fisherman's Wharf.